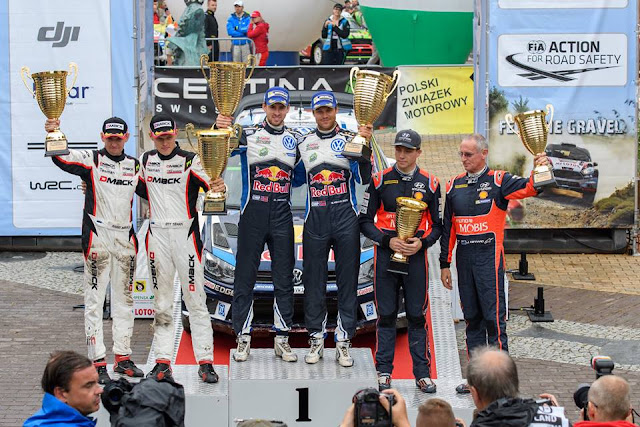 Andreas Mikkelsen emerged victorious as 73. PZM Rally Poland ended in a dramatic fashion. Ott Tanak who drove a perfect rally till the penultimate stage suffered heartbreak. In the penultimate stage Tanak was hit by a puncture. His right front tyre deflated as well as his hopes of victory. This handed over the lead to Mikkelsen and Tanak just managed to stay in second position. At the end of rally Ott Tanak was really disapointed and was inconsolable, as he was cruelly denied by the victory. 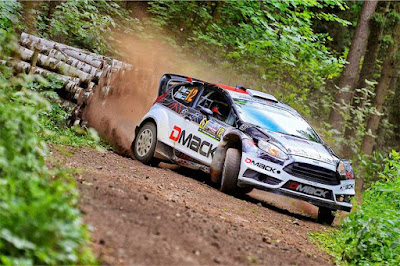 Rally Poland was kicked off by the short head to head super special stage in Mikolajki Arena. The real test for the crews was waiting the next day. Which consisted of nine fast and flowing special stages. From the word go Ott Tanak was fastest and he took the lead in second stage. Andreas Mikkelsen was also in good rhythm and won the third stage and took the lead. From then the duo were battling it out whole day. But Ott Tanak won four stages and ended day two leading the rally by 4.2 seconds. Andreas Mikkelsen kept up the pressure and was pushing. He was second at the end of the day. After two crash stricken rallies Hayden Paddon found good pace and was chasing the duo. He was in third. Once again Sebastien Ogier suffered from his road position and was playing catch up, he was in fourth 16 seconds adrift leader. Thierry Neuville and Jari Matti Latvala were fifth and sixth respectively. Citroen drivers Stephane Lefebvre and Craig Breen ended up seventh and eight at the end of day. M-Sport drivers had a poor day as Eric Camilli and Mads Ostberg finished the top ten at the end of day two. 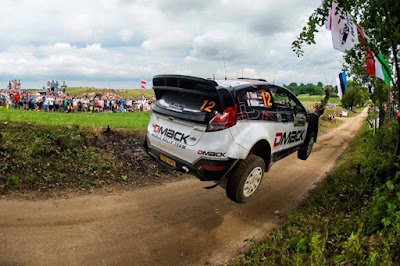 Day three, crews had to complete seven special stages. Ott Tanak made the perfect start as he won all three stages in the morning loop. Going to the midday service he was leading by 18 seconds. In the second loop Tanak maintained his pace and by the end of day three his lead was increased to 21.3 seconds and was all set for the last day. Mikkelsen was in a catching distance and was pushing for the victory. Paddon too showed good pace to remain in third position. His team mate Thierry Neuville was quick and made it to fourth. Latvala could not do anything special and was in fifth. In the sandy conditions Ogier had a worst day and was sixth just 3.6 seconds away from Latvala. And rest of the WRC field remained unchanged from day two. 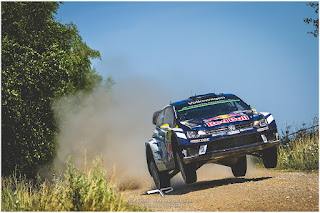 Day four, four stages. Ott Tanak just had to give some finishing touches to win the rally. But weather had some other plans. It started to rain and conditions suddenly turned wet and slippery. Tanak had a good morning loop and his lead was 18.6 seconds going into service. With the rain coming down second loop and the penultimate stage turned out slippery, muddy and rutted.
All the drivers struggled to keep the wheels on the road. Worst was waiting for Tanak as he picked up a pucture and his right front tyre of Fiesta WRC was deflating. With that his lead was gone. Finally he lost 40 seconds and was devastated. Mikkelsen was leading by 16.5 seconds and only 8.55km Power stage was left. FinallyMikelsen cruised to victory and won by 26.2 seconds. Ott Tanak was heartbroken at the end of power stage. Although he managed to finish second. Hayden Paddon finished third. He eased off a bit too much as his team mate Neuville was just eight tenth of a second behind. Thierry Neuville finished fourth holding off the Volkswagen pair. VW duo Jari Matti Latvala and Sebastien Ogier ended up fifth and sixth respectively. Ogier also picked up extra points by winning the power stage. Irish man Craig Breen finished in an impressive seventh place. Mads Ostberg was eight. Stephane Lefebvre was in 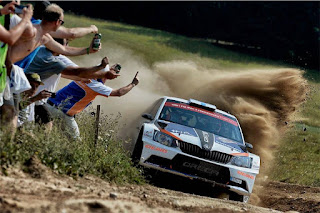 Thierry Neuville finished fourth holding off the Volkswagen pair. VW duo Jari Matti Latvala and Sebastien Ogier ended up fifth and sixth respectively. Ogier also picked up extra points by winning the power stage. Irish man Craig Breen finished in an impressive seventh place. Mads Ostberg was eight. Stephane Lefebvre was in ninth position as he went off the road and damaged the suspension of his DS3 WRC. Thanks to his mechanics he could drive the car. Eric Camilli rounded off the top ten as he too suffered mechanical problems. Hyundai pilot Dani Sordo crashed his i20 WRC and could not finish the rally.
In WRC 2 a identical drama happened. Finn Teemu Sunninen won the rally. Till the penultimate stage his countrymen Esapekka Lappi  was leading but he suffered a pucture and finally finished third. Elfyn Evans finished second. WRC 3 victory went to Italian driver Simone Tempestini driving a Citroen DS3 R3T Max.
Top 10 – Results

It was some action packed and dramatic rally. Motorsports can be cruel. Its proved once again. For more news on all the happenings in the world of rally subscribe to us at the bottom of the page. Until then, Happy Rallying!