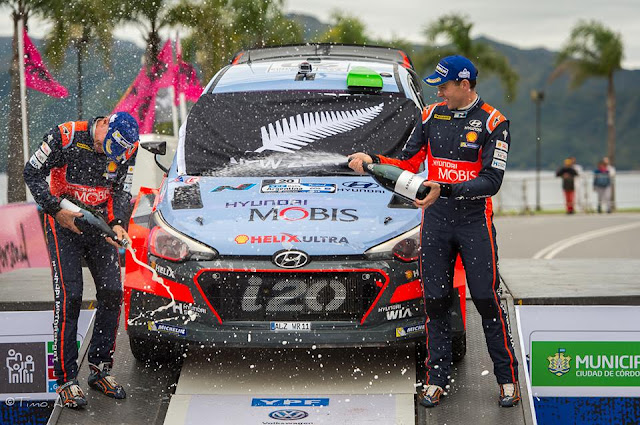 Hayden Paddon writes history as he becomes first New Zealand driver to win a WRC rally. On a thrilling battle with Sebastien Ogier, Paddon emerged on top after winning the power stage. It was a tough start for Paddon on third leg and there was only 2.6 seconds between Ogier and Paddon. But Paddon stormed through power stage and took a emphatic victory. Its also maiden win for new generation Hyundai i20 WRC. 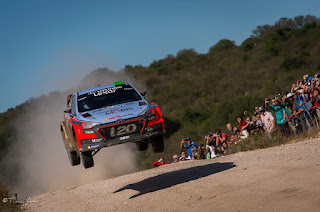 Leg three of Rally Argentina began with famous El Condor stage. Conditions were not favorable as thick fog covered the top of mountains and visibility was poor. All drivers struggled with visibility issues. Paddon had 29.8 seconds of cushion over Ogier. But after El Condor stage it was trimmed to 22.4 seconds. SS 17, Mina Clavero, thats where Ogier showed some serious pace to close down the gap to leader to just 2.6 seconds. Now it was all set for final showdown in El Condor which was the power stage. It was Hayden Paddon who drove a picture perfect stage and was 11.2 seconds quicker than Ogier. Taking the victory by 14.3 seconds, first Kiwi to do so. It was an emotional moment for Hayden Paddon and John Kennard. 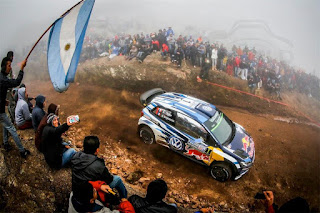 Andreas Mikkelsen finished third, he built a steady pace throughout the rally and was over a minute away from the leader. Dani Sordo who won the opening stage ended up fourth overall, just 11.9 seconds behind Mikkelsen. M-Sport driver Mads Ostberg and Thierry Neuville finished fifth and sixth respectively. Local star Marcos Ligato piloting a Citroen DS3 WRC finished in impressive seventh place. Eric Camilli was relieved to cross the finish line in one piece and was eight overall. Henning Solberg and WRC2 runner Nicolas Fuchs rounded off the top ten finishers. Jari Matti Latvala restarted after a freak suspension failure on leg two. Volkswagen mechanics did a impressive job to fix the car but it was not in a good shape. JML Hit problems in power stage and finally managed to finish the rally.

WRC 2 glory went to Nicolas Fuchs in his Skoda Fabia R5. Polish driver Hubert Ptaszek finished second and Abdulaziz Al-Kuwari rounded off the podium. WRC 3 saw only one entry and hence maximum points went to Michel Fabre driving a Citroen DS3 R3T.
Overall Classification
Rally Argentina was a thrilling one. It all went down to the wire. And the Kiwi kept his cool. For more action stay updated by subscribing to our news at botton of this page. Until then Happy Rallying!