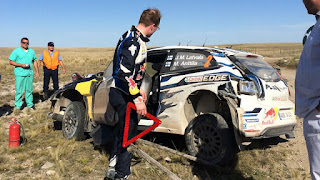 Rally Argentina bites Jari-Matti Latvala! Hard luck Flying Finn! In what it seemed like a freak suspension failure, over that normal bedrock ridden stretch of the gravelly track of SS14, JML‘s rally car, VW Polo R WRC, looses control and rolls a few times before coming to an halt back on its wheels.

It was rather relieving to see when both crew walk out safe from the wreckage, and his frustration was clear on the crash, shot from the helicopter video footage (see below).

Immediate beneficiaries of the wreckage were the next three, Hayden Paddon, Sebastien Ogier, Andreas Mikkelsen, who stepped up on to the top 3 slots and held it through the end of the penultimate day of the rally.

Marcos Ligato, the local Argentinian also benefits and moves up the leaderboard to 6th overall by the end of SS15. The bigger question is whether Paddon be able to hold up to the attack of the Frenchman, who is trailing almost half a minute to him.

Nicholas Fuchs rules the roost at WRC2 category, while the Qatari
barely made it to the service park after a hard day over the sandy gravel stretches of Rally Argentina. 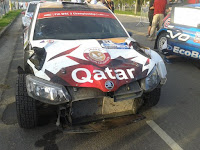 Today, the last day of Rally Argentina has just 3 special stages, the first stage the famous El’ Condor, will be repeated as the last one to be the power stage, where some bonus points will be up for grabs for the top 3 drivers/co-drivers that adds up for their championship points 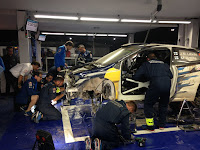 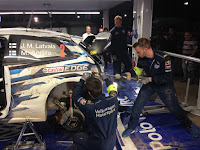 While JML Crashed out, mechanics at Volkswagen Motorsport are busy repairing it, in the allotted 3 hours to revive the car back for the last day. Latvala is still in point scoring placing and are hopeful that he can make it a tad bit better than slipping out of the 10th position last night standings.
More news coming in soon. Subscribe for instant email updates, at the bottom of the page below.