Recently concluded 2013 season for Indian Motorsport Prize Giving Gala was held in Mumbai few days back. Here is a quick glance of the INRC Team Champion press release.
SLIDEWAYS INDUSTRIES IS 2013 FMSCI-INRC TEAM CHAMPION
Pune’s first rally team crowned national champions in first full season in the Indian National Rally Championship
Mumbai, March 08, 2014: With victories and podium finishes in all five rallies of the 2013 season of the FMSCI Indian National Rally Championship, Pune-based Slideways Industries has clinched the INRC team championship. Making this feat even more commendable is that the accolade has come in only the first full season for the team in the championship. The team trophy was presented by senior officials of the FMSCI, the governing body of Indian motorsport, at a glittering ceremony in Mumbai.
Backed by Pune-based Pinnacle Group and Golden Sparrow Corporation, Slideways Industries was launched in September 2012 by four rally enthusiasts – Aniruddha Rangnekar, Byram Godrej, Rohan Pawar and Sirish Chandran. After a slow start thanks to the 2012 INRC season being truncated to just two rounds, Team Slideways Industries stepped on the gas in 2013 and debuted the Volkswagen Polo in the INRC. 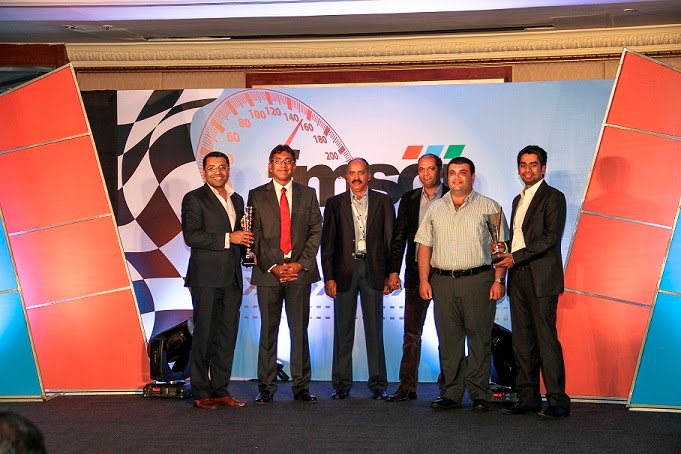 With factory backing from Volkswagen Motorsport, Slideways Industries was the first team in India to enter the Polo in rallying. Over the first two months of 2013 the team invested time and money to build, prepare and test the Polo rally car at their facilities in Pune and Coimbatore, and all the rigorous testing and focus on quality paid rich dividends when Sirish Chandran took the Polo to its debut class victory at the opening round of the season in Chennai. That was the first time a brand new car won in its very first rally in seven years, defying all odds and beating other established vehicles, and this set the ball rolling for an incredible campaign.
With India’s leading tyre manufacturer JK Tyre partnering the team from the next rally onwards Slideways Industries enlisted the services of former Production WRC and Asia Pacific champion Karamjit Singh (from Malaysia) and he stunned the rallying fraternity by taking the Slideways Polo to the top step of the podium in the Rally of Maharashtra in Nashik. In clocking the fastest times amongst all the cars Karamjit provided a crushing demonstration of the potential, capability and sheer pace of the Slideways Industries cars. The rally also saw six cars – all VW Polos – entered by Slideways Industries, increasing to seven by the end of the season, making it the largest team in the INRC.
The Slideways Industries Rally Polo is built to Group N (production class) specifications and runs a 1.6-litre engine uprated to over 130bhp with the addition of a Race Dynamics motorsport ECU. It runs on 15-inch JK rally tyres for excellent grip on gravel and tarmac stages, a Quaife limited slip front differential for improved traction, can tackle six-foot-high jumps at over 130kmph thanks to Reiger 3-way adjustable rally suspension and has a ultra-strong roll cage for safety among the other extensive modifications.
Thanks to car and tyre development the pace and reliability of the cars kept improving with Karamjit again clocking the fastest times amongst all the cars at the following rally in Coimbatore. Then on, and with an eye on the future, Slideways Industries entered the uprated R2-spec Polo for Karamjit Singh for the last two rallies. Run by VW Motorsport the car was used as a test bed for the more powerful engine and uprated transmission and suspension components in preparation for a full-fledged assault, and this will be the car to watch out for in the 2014 season.
With cars entered in the IRC, INRC overall, INRC 1600 and J-INRC Slideways Industries ended the 2013 season with 6 wins and 16 podiums. In the driver’s standings Sirish Chandran and Byram Godrej took second and third in the 1600 championship while Rohan Pawar and Aniruddha Rangnekar took third and fourth in the Junior-INRC championship.
Rohan Pawar, team principal, Slideways Industries said: “This is only the start. We are fortunate to have some of the fastest drivers, brilliant engineers and excellent partners and winning the team championship in our first full year is just reward for all the hard work the team have put in. Here on we step on the gas and expand our offerings with ‘Arrive and Drive’ packages for young up and coming drivers. Our aim is to make rallying affordable and less complicated for rally enthusiasts, give them a reliable and fast car that compliments their talents, provide training if required, and ensure more petrol heads can experience the joys of flying off crests and putting a rally car sideways on dirt. I can assure you it is the most fun you can have with your clothes on!”
Apart from Arrive and Drive packages, for the 2014 season Slideways Industries is also renting rally cars for as low as Rs 1.3lakh per event, including full service support and back-up, in order to bring in fresh faces and young talent to the sport.
The 2014 INRC season kicks off with the Rally of Maharashtra, the home rally of Slideways Industries, in the last week of May and is expected to have five rounds at Bangalore, Chennai, Chikmagalur, Coimbatore and the possibility of Delhi NCR or Kolkata joining the fray.